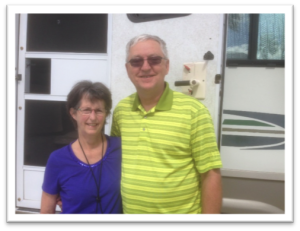 In March of 2014 my wife and I were on our way back to Minnesota from our winter vacation in Tucson and stopped in Mesa due to an electrical problem. The next evening my wife Luann wasn’t feeling well and went to bed early, only to be awakened around midnight with chest pains. Luann has Muscular Dystrophy and had previously had a stroke in January, so I called 911 and they transported her to Banner Heart Hospital in Mesa. The ER monitor showed no signs of a heart attack so they admitted her and began looking for blood clots. The next morning she was in even more pain from a blood clot found in her lung.

She was given blood thinner medication which helped tremendously and doctors encouraged her to move around as much as possible to prevent another clot. Later, when Luann was finally released, the doctor said that considering her condition she would not be able to endure the drive home and that it would be better for her to fly home. I called SkyMed and they immediately began making arrangements to fly us home to Minnesota and to have our RV returned.

How did you find out about SkyMed and why did you choose SkyMed? When I retired in 2008 our attorney suggested we look into getting an emergency medical assistance program for my wife. We went with a different company until the second year when we attended a SkyMed seminar in Tucson and saw how much more SkyMed had to offer than the other company for basically the same amount of money. One of the main reasons we switched to SkyMed was the benefit of returning our motorhome to Minnesota if we encountered a problem. The 100-mile waiver was also very important as we do a lot of traveling within that radius since only our home hospital has the facilities to give Luann the level of care she requires.

What would you tell your friends about your experience with SkyMed? I have shared with many family members and friends how SkyMed rescued us in our time of need and took away my worries of how I was going to get my wife home safely. After the call to SkyMed I was able to relax and focus on Luann’s health and recovery. SkyMed’s services not only impressed me, but also the doctor and social workers at the hospital. SkyMed also paid to fly our son down to Mesa so he could drive our RV home and after sending in the receipts for the motorhome return there were no questions or rejections. They reimbursed the expenses up to $100 a day which was another huge relief. Luann is doing remarkably better these days and we are still very grateful for the excellent care we received from SkyMed.