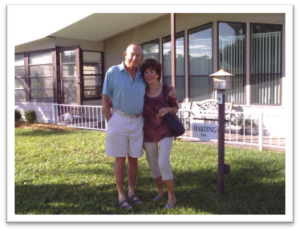 After catching a cold in February of 2015 I developed chronic shortness of breath to the point where I was terrified to fall asleep at night because I would stop breathing in my sleep and would wake up choking. This happened night after night and I finally drove myself to the ER at The Villages Regional Hospital at 6:00 a.m., completely exhausted. They admitted me and ran several tests and the cardiovascular doctor told me I had severe heart damage and may have had a heart attack or two and would run more tests. He also said I had fluid on my lungs and an abnormal heart beat, high blood pressure and that I needed an angiogram.

As Canadians our healthcare is totally paid for if we get sick in Canada, but we came to the US without insurance. It was critical that I get back to Canada for the required tests so I phoned SkyMed right away and explained the situation and that we wanted to go to the hospital in Kitchener, Canada. SkyMed went into action and the next day they called and told us to be ready by 6:30 the next morning and to bring our cat. We were picked up the next morning and transported to Leesburg Airport, where we boarded a Lear jet that was waiting for us staffed with two pilots, a nurse and paramedic. We flew directly into Kitchener, where an ambulance was waiting to take me to the hospital and b 11:15 a.m. I was in my hospital bed in Kitchener.

How did you find out about SkyMed and why did you choose SkyMed? Years ago when travel insurance became almost impossible to get and was barely affordable I began searching for a solution and found SkyMed. I called them with questions and they were so informative and helpful that I decided to sign up and travel without travel insurance.

What would you tell your friends about your experience with SkyMed? From the moment we called SkyMed, everything we needed was efficiently organized, from securing a hospital room in the very hospital I had requested, to ambulances, a private Lear jet with two pilots, a paramedic and nurse. And then, in under three hours, I went from being in a hospital bed in Florida to my hospital bed in Canada without incident. There’s no better hands to be in than SkyMed’s and their amazing service is something I can’t imagine being without.