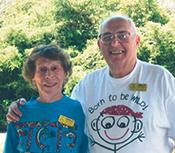 Shirley and Walt Greenes were in Ashland, OR, when Shirley became ill and was rushed to the emergency room of the local hospital. Shirley wrote, “The doctor at the hospital felt that due to previous surgery, he would not be able to perform the surgery now needed. It became imperative that I get back to Los Angeles as quickly as possible. I was taken by ambulance to a waiting jet, flown to Los Angeles with two nurses in attendance, met at the airport by another ambulance and taken directly to Cedars Sinai Hospital. One phone call provided me with a service I cannot praise highly enough. I was lucky to be covered by a SkyMed policy.”