It’s no surprise a country as vast as Mexico—with 761,601 square miles, it’s nearly three times the size of Texas—hosts a wealth of incredibly varied natural and man-made wonders. The Central Region is the heart of colonial Mexico, with many of its cities declared UNESCO World Heritage Sites. The natural scenery that surrounds them is breathtaking as well, a mixture of meadows and forests, sky-blue lakes and volcanic peaks.

These architectural treasures are a result of the Spanish Conquest, and present a unique mix of local culture and Old World traditions. Of course, the Catholic Church spearheaded the spread of Europe into the New World, so the cities are also filled with spectacular chapels and cathedrals.

A tour of colonial Mexico is a treat and it’s relatively easy to get to. The highway infrastructure is one of the best in the country and there are six international airports that connect it with Mexico City and the principal U.S. gateways.

A visit to any of the many cities that form part of the Route is an architectural buff’s dream come true—graceful wrought iron balconies grace well-restored façades, tall spires top churches with golden altars, beautiful buildings surround shady plazas… But they have much more to offer than fabulous photo ops. The marketplaces of these colonial cities are filled with some of the finest handicrafts in the country, from the hand-loomed textiles and black pottery of Oaxaca to the detailed clay catrina dolls, the daintily dressed skeletons which have a colorful history dating back to the engravings of José Guadalupe Posada, a native of Aguascalientes.

Here’s a short list of some of the top colonial cities in central Mexico, but it’s by no means an exhaustive one. For more on where to enjoy Colonial Mexico at its best, visit the official website of the Mexico Tourism Board at www.visitmexico.com. 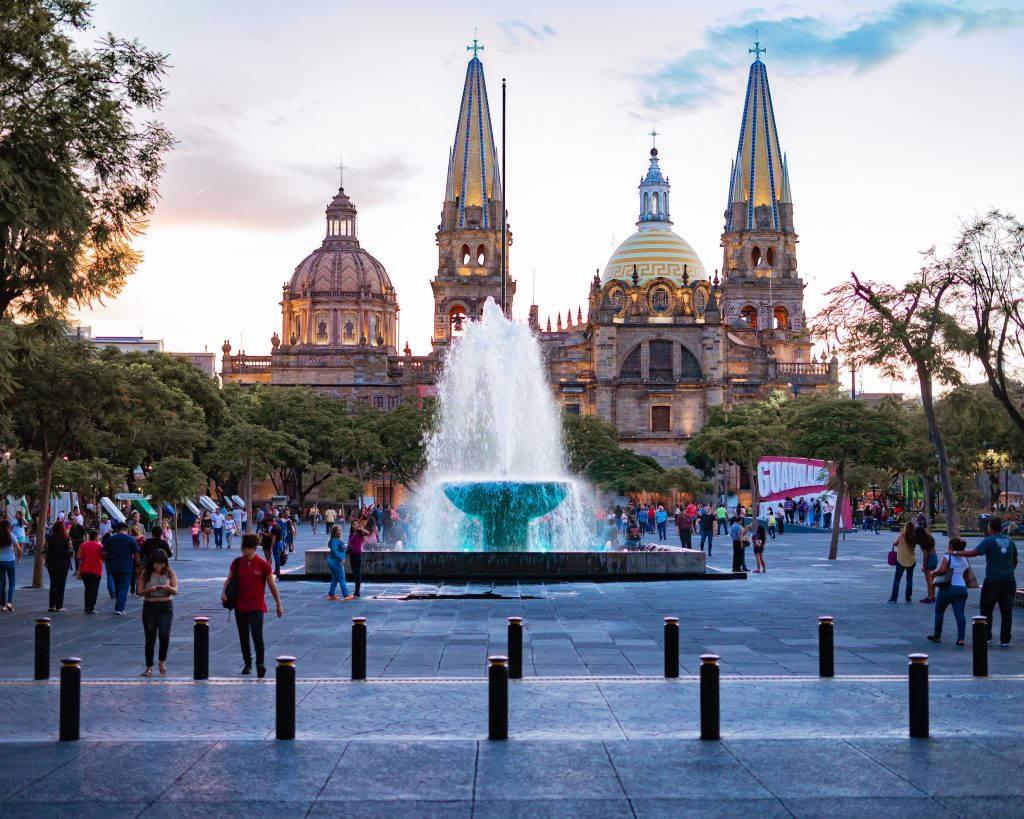 Guadalajara is the birthplace of tequila, the mariachi bands and the Mexican cowboy—the charro. This is one of the largest cities in the Republic, thus offering a wonderful blend of modern amenities and attractions with a rich historical background.

There’s much to see and do in Guadalajara. The Cathedral is one of the centerpieces of its colonial heritage. Built in the 16th century, it is famous for its paintings and a sculpture donated by King Carlos V in 1548. The Government Palace, which dates back to the 18th century, has a fantastic Baroque façade—a treat for architectural buffs. And don’t miss taking in a show at the Degollado Theater (modeled after La Scala, in Milan), perhaps preceded by a late afternoon stroll through the Liberation Square, built in honor of the abolition of slavery in Mexico under the leadership of don Miguel Hidalgo.

The state is also justifiably proud of its natural assets, which include the largest freshwater lake in Mexico—Lake Chapala—and the fabulous Sierra Madre Mountains. Guadalajara also has its own hot springs getaways nearby in the village of Villa Corona, including Agua Caliente, Las Brisas and Los Camulcos. Boats can be hired to cross the beautiful Atotonilco Lake near the village.

Shopping is another of its biggest attractions: Tlaquepaque, once its own town but now a suburb of the city, is the very best place to give your charge cards a good work out. Think unique pieces of furniture, wooden carvings, colonial antiques, glass items, paper maché and much more.

(Photo by Roman Lopez on Unsplash) 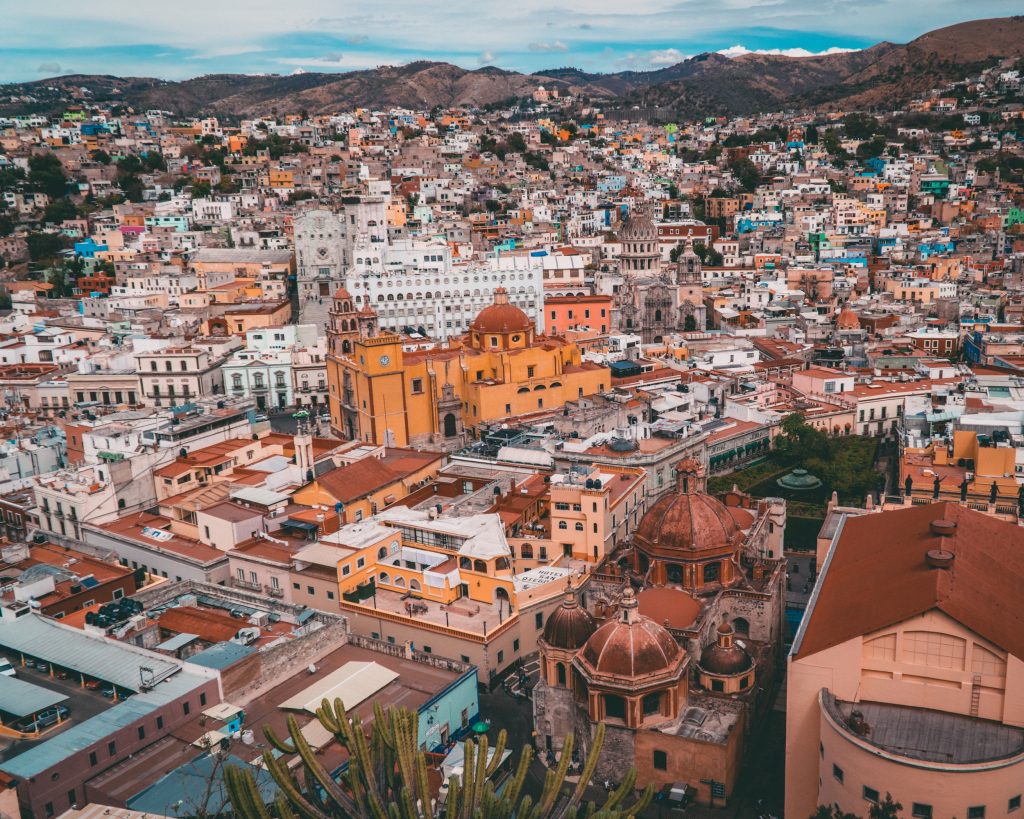 The small city of Guanajuato, nestled in the Sierra de Guanajuato, is one of the most beautiful examples of the colonial treasures of Mexico. Bouquets of brightly colored flowers pour over balconies, adorn the cobblestone streets and scent the air in the many plazas. Once a top mining town (take a tour of the working silver mine), it’s also the spot where one of the first battles in the fight for Mexico’s independence took place. Guanajuato is a very cultural town, with several beautifully preserved colonial theaters that host the annual International Cervantine Festival, a two-week long celebration of medieval arts, dance, street theater and music held every October. (The celebration, by the way, also spills over into San Miguel de Allende.)

The nearby city of San Miguel de Allende is another jewel of the colonial crown. Gorgeously restored, its cobblestone streets are lined with scores of boutiques, silver shops and restaurants. There’s a very active colony of Canadian and American expatriates here, many of who moved here to write, paint and listen to the muses of Mexico. If you’re interested in learning Spanish, San Miguel has several language schools, as well as some outstanding boutique hotels.

(Photo by Dennis Schrader on Unsplash) 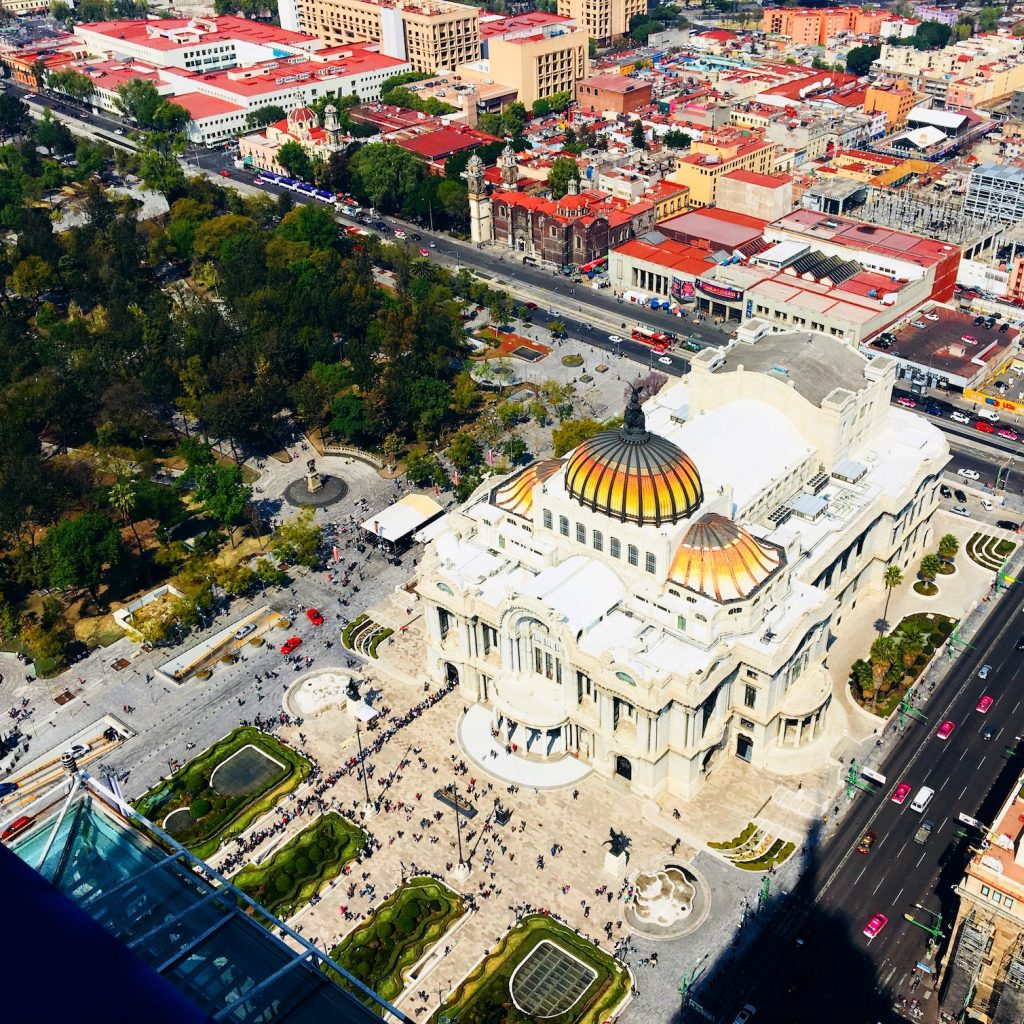 The capital of the Republic is the second largest city in the world and the cultural capital of Mexico as well as its political epicenter. Here you’ll find scores of excellent museums and dozens of theaters and entertainment venues.

The meticulously restored historical center is fascinating not only for the wealth of architecture and art it exhibits, but also for opening a window into an even older culture: that of the Aztecs. The Metropolitan Cathedral, symbol of Catholic might and dedicated to the lovely Virgin of Guadalupe, was built over the remains of an Aztec temple. Yards away from the temple, there is a live excavation of the ancient city of Tenochtitlán.

The nightlife of Mexico City is legendary—choose from bohemian nights in a piano bar to rowdy discos or upscale martini bars. There are restaurants on every corner, serving everything from homemade tacos to the finest European cuisine and nouvelle Mexican cooking. There are also taco stands on every corner, though we strongly recommend shying away from those in order to preserve the integrity of your stomach (Montezuma’s Revenge is not a legend!)

Your charge cards will get a workout here as well, whether you choose to peruse the mercados for handicrafts from all over the country or meander down the manicured streets of Polanco, an exclusive area dotted with upscale boutiques ready to rival any on Fifth Avenue.

(Photo by Manuel Arroyo on Unsplash) 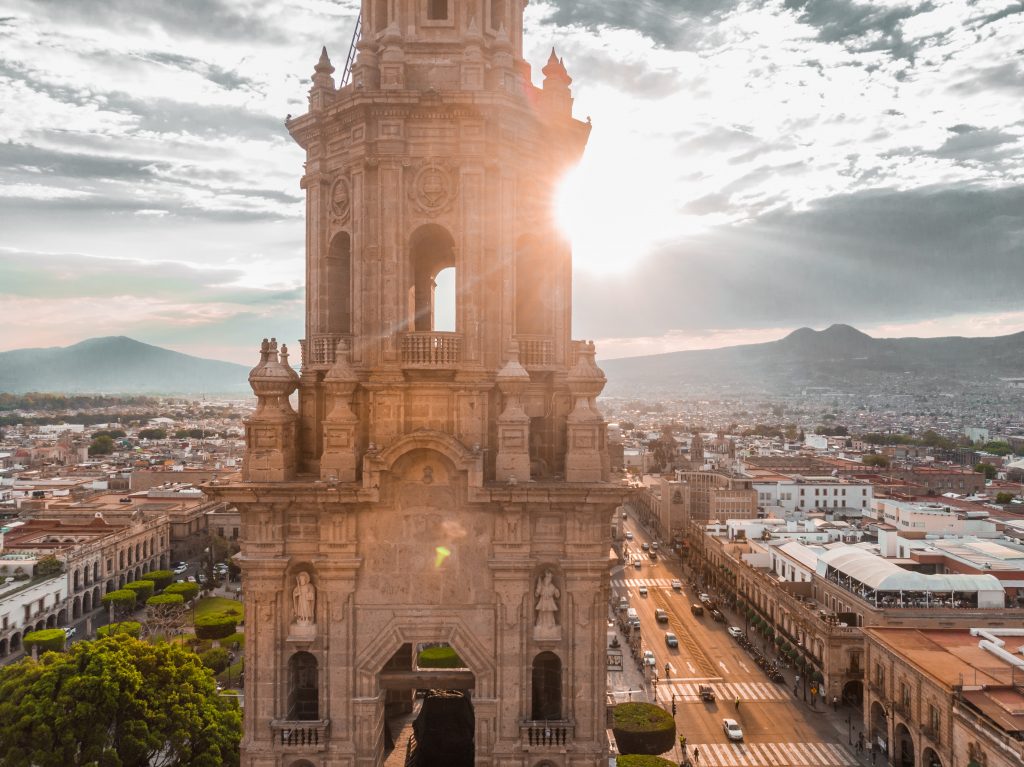 Morelia’s historic center shimmers in the afternoon sun like a confectioner’s dream come true: over 200 of its buildings were made with pink stone and decorated with so many arches, spires and domes they might remind you of a collection of wedding cakes. The epicenter of the state’s arts and culture, Morelia has excellent golf courses, great nightlife, theaters, galleries, some of the best shopping around and a number of exquisite boutique hotels housed in restored buildings.

The city is laid out in a perfect Colonial-era grid (as are most of the Spaniards’ work). It’s a great pedestrian center, with the clean streets filled with shops, restaurants, bookstores and, not surprisingly, a wonderful collection of candy stores. Morelia, you see is the Candy Capital of Mexico. Enter one of these shops and you’ll find yourself surrounded by an incredible collection of sweets, most of them handmade. Don’t miss the Museo del Dulce, a museum with a store where you can see these treats being made by ladies dressed in period costumes.
Note: from November through February, the annual migration of monarch butterflies fills the El Rosario Butterfly Sanctuary a few miles from Angangueo, Morelia, with millions of bright orange wings. The city has an international airport and is easily accessible by highway.

(Photo by Jezael Melgoza on Unsplash) 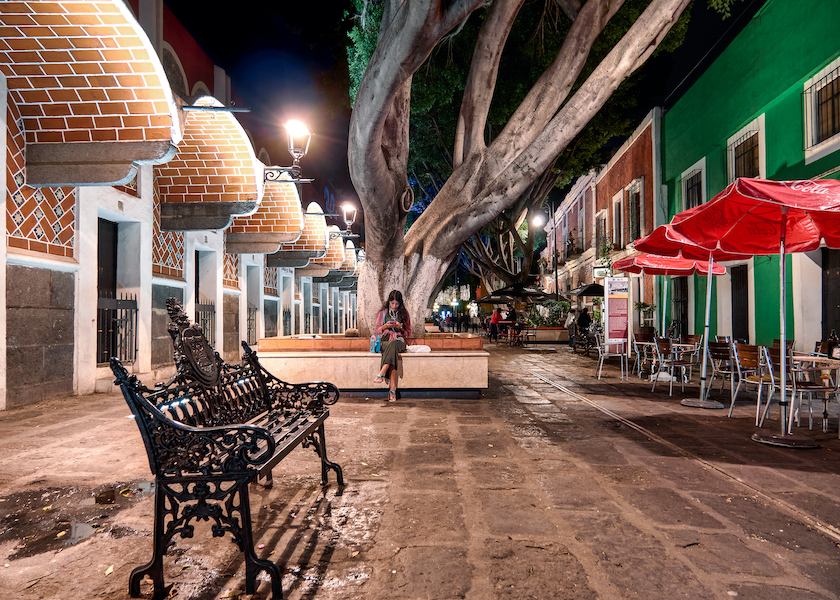 Known as the cradle of Mexican Baroque, the city of Puebla was also the first city in the New World to produce the colorful Spanish talavera pottery and tile. Many of its buildings have incorporated these handmade pieces into their façades, making them great subjects for photographer’s albums. One of the most important examples of Mexican Baroque is the Church of Santo Doming, considered the “eighth wonder of the world” for its rich ornamentation. Puebla is also where the famous Cinco de Mayo battle was fought against the French (though it’s definitely not celebrated in any way shape or form like it is in the United States, by the way.)

Puebla is surrounded by natural attractions, including the still-smoking Popocatépetl volcano, the lovely Iztaccihuatl and the Pico de Orizaba. There are several pristine lagoons in the area, great for fishing and water sports. Its climate—mild and humid in the mountains, semidry in the plains and hot and humid in the valleys—is benign enough to allow indulgence in many outdoor activities. 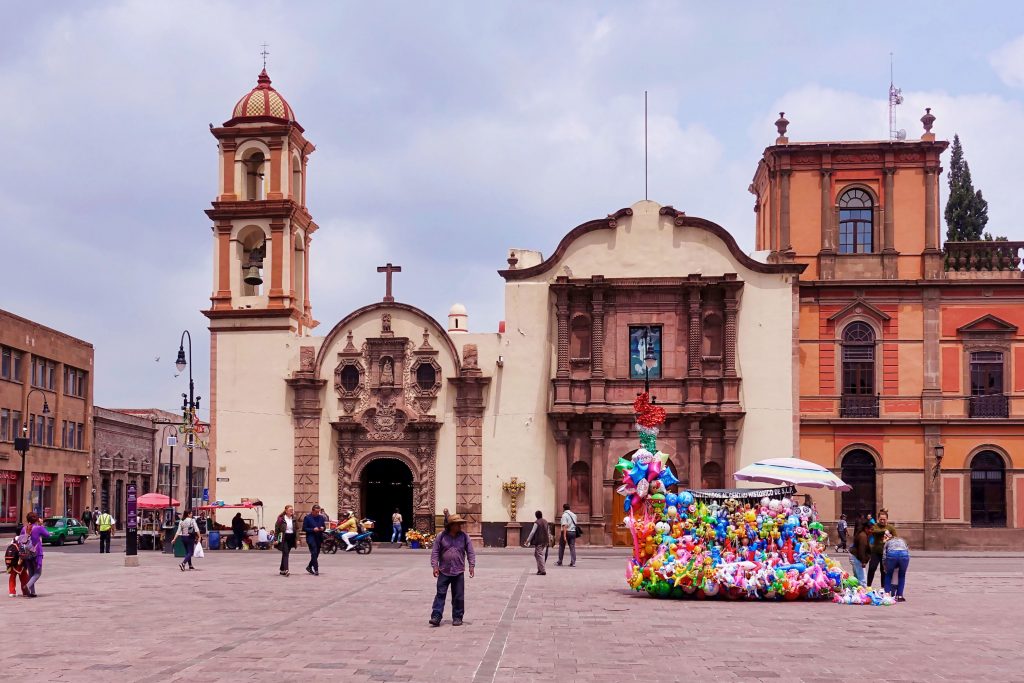 This beautifully restored city dazzles with its many colonial and natural wonders. This region is rich in waterfalls, grottos, lagoons and springs—making it a natural for water sports such as fresh water fishing, diving and duck hunting. The town itself is bright with colorful gardens surrounding valuable examples of Churrigueresque art, such as the chapel of Aránzazu (now a museum). In the main plaza, look for the twelve carved figures of the apostles in the San Luis Rey cathedral, copies of the ones by Bernini in Rome. 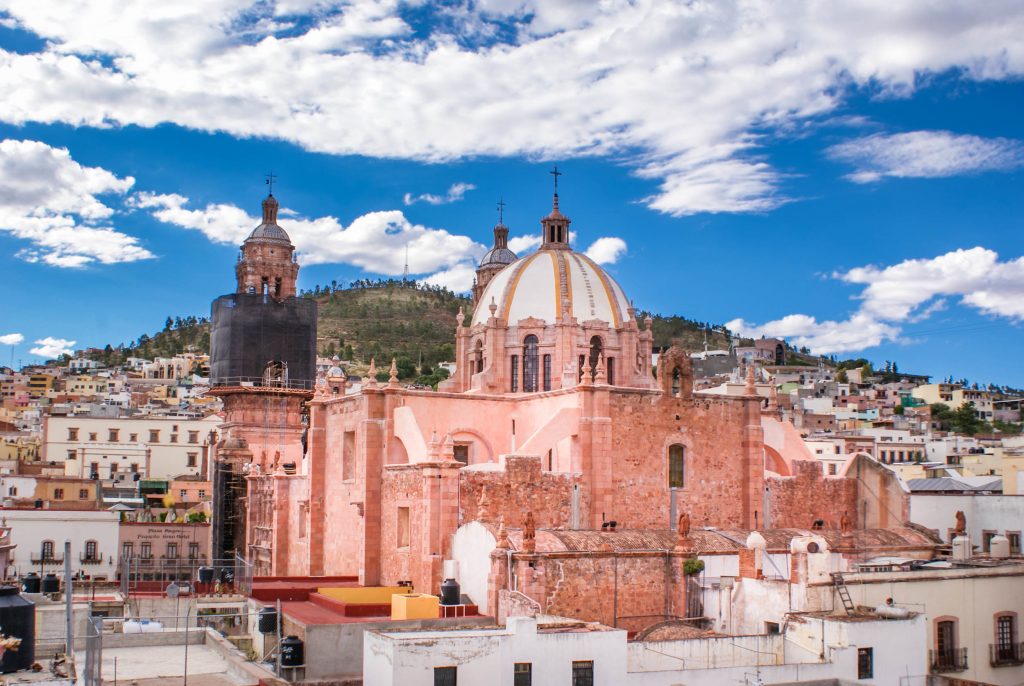 The Cathedral of Our Lady of the Assumption of Zacatecas.

Zacatecas is an impressive monument to the colonial era, a treasure house of architecture that reflects the massive wealth of its citizens during the 17th century. The city has several excellent museums, many housed in colonial buildings. Pink quarry stone was used for the buildings and the plazas, curvaceous wrought iron adorned the balconies and cobblestones paved the streets. The crown jewel of the historical center is the Cathedral, built in 1752 and considered a masterpiece of Baroque architecture. Its main entrance is carved in pink quarry stone, delicately worked to resemble garlands of flowers and foliage. Other must-see temples are the church of San Agustín and the 18th century church of Santo Domingo.

One of the most exciting experiences in the city is a visit to the inside of the El Edén Mine. A small train with narrow wagons will take you into the shafts where you can still see the glint of mineral deposits. Once outside, don’t miss the cable car ride that takes you over the entire city all the way to the Cerro de la Bufa.

CLIMATE
The climate in the high plateau areas is balmy and springlike nearly 365 days a year. Temperatures can drop into the 50s as the sun goes down, so take something warm with you on your trip. We highly recommend dressing in layers.

Mexico is part of the SkyMed TAKES YOU HOME service area—take your membership with you and rest assured, should something happen, we have your back!