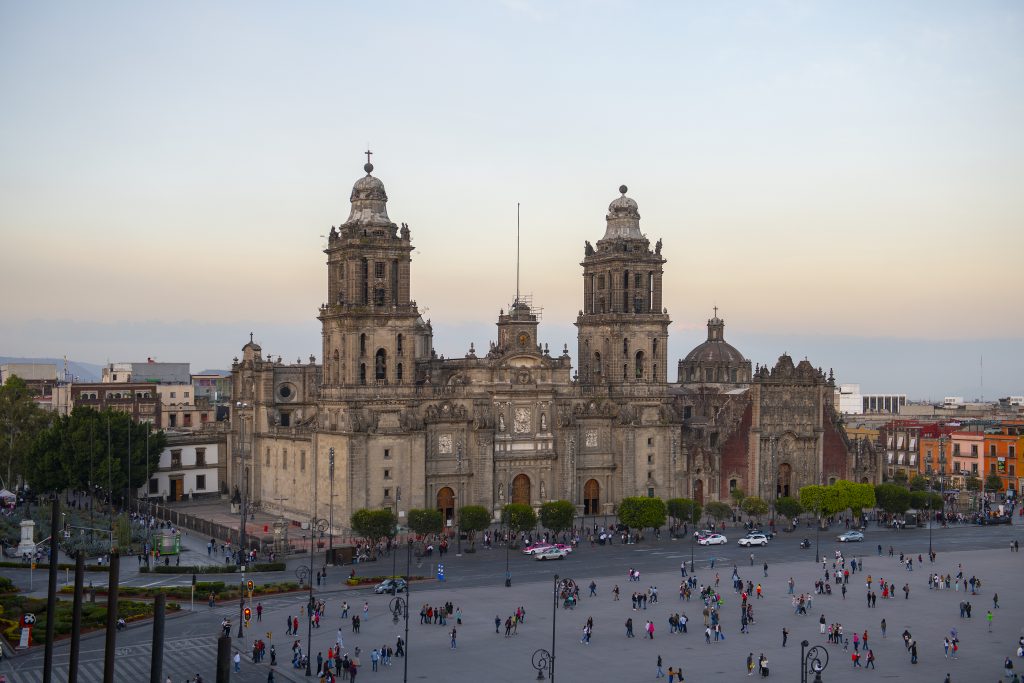 The Zocalo Constitution Square and Metropolitan Cathedral at sunset in the Historic center of Mexico City.

Gritty, magnificent, and 100% exciting, Mexico City—or CDMX—is Gotham with a Mexican accent. It’s hard to distill so many possibilities into a few paragraphs, but there are certainly numerous experiences no visitor—whether traveling en familia or not—should miss. The trick is to return more than once and always stay as long as you can.

Hot tip: the best way to get around to the many historical, cultural, and architectural monuments that make up the heart of the city is Turibus, a tourist bus service where you purchase just one ticket that’s valid for 24 hours and hop on and off at will.

Here, in no particular order, are Top Ten “Must Sees” in Mexico City.

1. The Museo Nacional de Antropología (National Museum of Anthropology) This huge, extraordinary museum (almost 20 acres worth of exhibition halls and gardens) is a place you’ll want to spend at the very least a half-day. Considered one of the finest of its kind in the world, the ground floor is dedicated to an astounding array of artifacts that date from prehistoric times to recent finds (don’t miss the famous Piedra del Sol, the Aztec calendar stone, and the giant carved Olmec heads). Upstairs, there’s a living museum with recordings of songs and dances, lifelike models of huts, samples of crafts, and other details that will give you a glimpse of how pre-Hispanic customs still permeate Mexico’s modern-day life.

2. Museo Soumaya. Telecom tycoon Carlos Slim Heliú’s Soumaya Museum is one of his biggest gifts to the art world. Named after his late wife, the Soumaya is a 150-foot tall building displaying (just) part of Slim’s vast private collection. Alongside the pre-Columbian and colonial exhibits, the Soumaya showcases work by Mexican masters like Rufino Tamayo, David Alfaro Siqueiros, and Diego Rivera, plus some of Mr. Slim’s Picassos, Dalis, Da Vincis, and, in a nod to Paris, the second-largest private collection of Rodin sculptures outside of la France. The museum contains the world’s largest collection of pre-Hispanic and colonial-era coins, the largest collection of casts of sculptures by Auguste Rodin outside France, and the world’s largest private collection of his art. And… It’s free.

3. The Zócalo. This massive square—one of the largest public plazas in the world—is the heart of the city’s Historic District. Start your walking tour with the Palacio Nacional and a look at Diego Rivera’s famous murals, then cut across the plaza to the Templo Mayor, a massive Aztec temple unearthed by chance in 1978 by city workers. You can see the ruins from the sidewalk, but we suggest paying a nominal fee to go inside and check out the museum. On the north side of the Zócalo you can’t miss the gigantic Catedral Metropolitana, one of the biggest churches in the Americas with a mesmerizing history.

4. Chapultepec. Generations of Mexican families have taken their children to the lake at Chapultepec Park to feed the ducks. This startling expanse of green is the ultimate retreat in a city of millions (think Central Park on a grander scale). There’s a zoo, an amusement park, several museums, and a castle with the very best view of the city skyline.

5. The “floating” gardens of Xochimilco. In ancient times, the Mexica created artificial islands (chinampas) anchored in the shallow lakebed of the Valley to grow their food staples. Today, brightly colored trajinera boats cruise the canals between the remaining chinampas, ferrying tourists, dueling mariachi bands, flower girls, and food vendors hawking tacos and other treats (be cautious about indulging, but the aromas are quite tempting!) This floating marketplace is packed on weekends and holidays, but quiet during the week.

6. The Ballet Folklórico de México. Countless groups perform traditional Mexican dances throughout the city, but none with the passion and panache that infuses founder and choreographer Amalia Hernández’s version. This vibrant tour of the country’s history and traditions expressed through dances and costumes is performed twice a week at the Palacio de Bellas Artes. An ornate marble beauty topped with a golden dome, the Palacio boasts an Art Deco lobby with murals by Mexican masters Rufino Tamayo, Diego Rivera, David Alfaro Siqueiros, and José Clemente Orozco and a spectacular Tiffany stained-glass stage curtain.

7. San Angel. There’s nowhere savvy shoppers rather be on a Saturday morning than at the Bazar del Sábado, the Saturday Bazaar, at the Plaza San Jacinto in San Angel. This neighborhood is just gorgeous with cobblestone streets lined with lovely colonial homes, churches, and great museums. The weekly bazaar is a treasure trove of antiques and fabulous arts and crafts. It’s virtually impossible to leave empty-handed.

8. Coyoacán and the Museo Frida Kahlo. East of San Angel, Coyoacán is another alluring colonial suburb, made even more popular by the fact that it was home to the prolific muralist Diego Rivera and his fascinating wife, Frida Kahlo. She lived in the charming Casa Azul, complete with a whimsical pink pyramid in the backyard, where more often than not you’ll find a cardboard nest filled with brand new kittens—the place is full of felines. The house itself literally brims with Kahlo’s crackling energy and oftentimes heart-wrenching artwork.

9. Avenida Presidente Masaryk, Polanco. This is shopping on steroids: many of the mansions that line this main street have been converted into ultra-deluxe boutiques comparable to L.A.’s Rodeo Drive. Some of the country’s finest chefs have opened restaurants here as well, including the excellent Pujol, the brainchild of Enrique Olvera. Keep in mind that in Mexico the main meal of the day is the comida, served between two and four in the afternoon. That leaves room for a nice cena in the evening, which can happily extend—with drinks—long into the night.

10. Teotihuacán. No visit to Mexico would be complete without a tour of the mighty pyramids of the Sun and Moon at Teotihuacán. The guidebooks aren’t kidding when they call them “breathtaking.” If you are fit and aren’t afraid of heights, climbing to the top of both pyramids is highly recommended. Tackle the Sun first then at least hit the first platform of the Moon for an incredible view of the Avenue of the Dead.

Mexico is part of thhe SkyMed Universe, which means you can trust your SkyMed Membership will take you to your home hospital in case of a critical illness or injury.