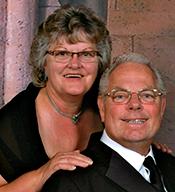 My wife and I were playing cards at a friends in San Carlos in Sonora, Mexico, when my friend asked me about an air vacation card he had mentioned earlier. I reached into my wallet and pulled the SkyMed TAKES YOU HOME card out that I always carried. I told him that I figured if I never used it in the 5 years I had it, which was to expire in one more year, that the investment would still be worth the money to have the peace of mind, and that we were blessed with 5 years of good health. Little did I know that within the next 24 hours my wife was going to accidentally ingest a single swallow of a deadly form of hydrogen peroxide.

The next night she was being transported by ambulance 75 miles to Sima Hospital where she remained unconscious for four nights in critical condition. On the third morning my daughter, son-in-law and son were working with SkyMed to make arrangements to transport my wife in her unconscious but stable condition with a breathing tube from Sima Hospital in Hermosillo, Mexico, to Scripps Memorial hospital in San Diego, California. Needless to say this was a very traumatic period and SkyMed did a terrific job in coordinating this operation and did a spectacular job of taking the strain off all of us.

The Lear jet arrived as scheduled at Hermosillo airport with the pilot, co-pilot and two male nurses. The transition of bringing my wife by ambulance from the hospital to the plane went without a hitch. As a passenger on the plane making the trip to San Diego, I was able to observe the professionalism of the crew and male nurses in making this a very comfortable experience for me, knowing that the nurses were giving my wife their complete attention while handling a patient that had tubes connected to her everywhere, monitoring devices, and a breathing tube requiring on board oxygen. It was easy for me to see that the medical team was highly trained. When we arrived in San Diego the same professionalism was demonstrated in taking her off the plane and turning her over to the ambulance crew at the San Diego airport. During the flight the pilot and co-pilot were able to fly the plane in a very smooth manner.

My family and I want to thank SkyMed, especially Jim Edwards, Director of Member Services, and your entire staff for exceeding our expectations.

One further note if anyone reading this would think that our family is compensated for writing this letter to Jim, I want to set the record straight… No one in our family has had any contact with anyone at Sky Med since this transport except for professional and concerned follow-ups.

P.S. My wife is out of the hospital after 10 days and is having an excellent recovery without any permanent injuries.