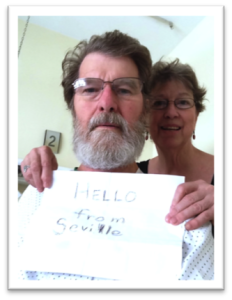 I had traveled to Spain to meet with family members and to walk for a week on the Camino to Santiago de Compostela. After the Camino, I went to the south of Spain to visit Granada and Seville. At one point I traveled by bus which broke down and when a rescue bus arrived, I stepped into a tall grassy area after disembarking the broken down bus. By the time I got to Granada I noticed my right shin was inflamed and was bothering me. The next morning my leg was so much worse that I went to the local hospital but the problem was misdiagnosed. Upon arriving in Seville the following day my leg had worsened considerably so I checked into a hotel and then took a taxi to the emergency room where I was admitted.

My wife notified Global ETS that I had been admitted to Hospital Universitario Virgen Macarena in Seville, Spain, with a serious leg infection that was later diagnosed as Necrotizing Fasciitis, a “flesh-eating disease” that spreads quickly and is oftentimes fatal. For the next five weeks I was treated with IV antibiotics and underwent multiple skin graft surgeries. Two of my sons stayed with me, one each during the first two weeks in the hospital and emailed updates to everyone regarding my condition, including Jim Edwards at Global ETS. My sister Marilyn flew to Spain to be with me as I would need an escort home. Three weeks later I was released from the hospital and Global ETS paid for two first class tickets home for Marilyn and me with ground ambulances before and after the flight. According to Marilyn, “Eddie did well on the long return flight home, especially in first class where he was much more comfortable. Our flight arrived safely around 6:00 p.m. When the airplane door opened there was an Acadian ambulance with a stretcher and a Sheriff’s deputy waiting to take us off the plane first. We went through the terminal and exited to find the entire family waiting with welcome banners for both of us — the excitement was overwhelming!!”

How did you find out about Global ETS? I found them through an Internet search which offered just what I was looking for.

What would you tell your friends about your experience with Global ETS?  It was wonderful because Global ETS arranged and paid to fly us first class from Madrid to Dallas. This allowed me to lie down and that helped tremendously. I’m out of the hospital now but still very weak and have open wounds requiring daily hyperbaric therapy. I have a long road of recovery ahead but I’m home and gaining back the weight I had lost. Initially my family was upset that I didn’t get full travel insurance, but we were all so very thankful I had Global ETS. Thank you SkyMed/Global ETS for the ease in making all of this happen! 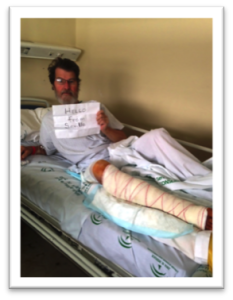