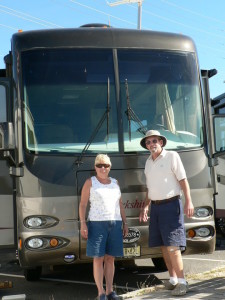 While wintering in Sebastian, Florida, my husband Charlie had a heart attack and more… he aspirated.  I took him to the emergency room and he had another heart attack while we were waiting in the ER.  It seemed as if they were going to just let him die when Charlie looked up at me from the gurney and said, “Please don’t let me die.”  They intubated him immediately.

While at the local hospital I tried to listen to the doctors and trust them to help Charlie.  After he was a little more stable they transferred him to a rehab facility but that turned out to be a nightmare.  I signed him out of there and took him back to a larger hospital in Melbourne.  Being away from our home and our doctors, I again tried to be cooperative with the doctors and trust them, but I finally became very uncomfortable with the situation and knew I had to get him home.

Then I remembered we have SkyMed and called the number on the back of the card and talked to a very helpful man named Jim.  He told me not to worry about anything except getting my husband better and that he would take care of the rest.  I was later contacted by a woman from SkyMed named Corinne who told me to put her phone number in my phone and if I needed anything during our trip to contact her right away.  All went well and I did not need to contact her. Jim took care of all the details and we were flown by a private air ambulance to Philadelphia International Airport where an ambulance was waiting to take Charlie to Penn Presbyterian Medical Center.

How did you find out about SkyMed and why did you choose SkyMed?  We’re FMCA members and heard about SkyMed at an FMCA rally a few years ago.  After listening to a very informative presentation given by Dorothea Adams, we decided we needed to sign up and we’re so glad we did because, unfortunately, we had to use it.  Dorothea Adams is a fellow RVer and we have kept in touch with her.

What would you tell your friends about your experience with SkyMed? I have told several people about SkyMed and what a relief it was to have their services because they were very helpful, they saved my sanity and saved us thousands of dollars.  In fact, the social worker at the hospital in Melbourne was so impressed that she asked for SkyMed’s contact information so I gave her Dorothea’s phone number.  As of today Charlie is still in the hospital, but we have faith in the doctors here and we’re so glad to be home!