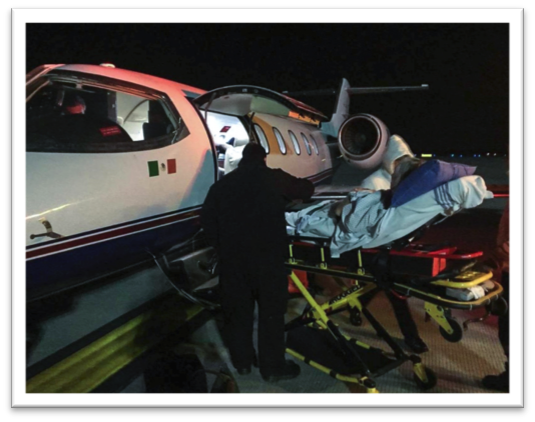 While sweeping down the stairs from the new restaurant on Cuna de Allende, I reached for the banister but it wasn’t where I expected it to be. I landed smack on my hip which shattered. The Red Cross arrived, bundled me into the ambulance and bounced me over the cobbles to H-Plus Hospital. The following morning we were trying to decide what the next move was, who would operate on Sunday, and where. Then I remembered joining SkyMed and this certainly seemed like a qualifying occasion to try it.

One call to SkyMed helped us sort out the options available. SkyMed could have a plane in Queretaro ready to take me to my doctor in New York at 4:00 a.m. the next morning. SkyMed contacted my doctor who alerted the hospital and before dawn there was an ambulance ready to whisk me to the airport. “Don’t take much with you!” we were cautioned; Lear Jets don’t have much luggage room!” There was room for two pilots, two doctors, my son and my stretcher taking up most of the cabin. Four hours later we were in Teterboro Airport where another ambulance was waiting to take me to NY Presbyterian Hospital.

The whole experience was reassuring, as comfortable as it could be, and in talking to friends here and in the States, many will not take a trip without this coverage. If you are a permanent resident here there is no problem with the legalities. Sarah Ash is the representative: her cell is 415-125-3537 and her email is sarah.ash@skymed.com. By the way, my return trip to San Miguel was included!