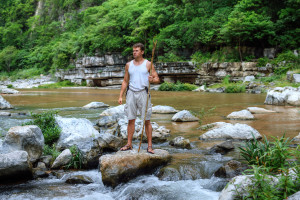 Shades of Bear Grylls… Too much? Don’t worry—they have restaurants.

“Adventure travel” means different things for different people, but Mexico is one country where there truly is something for everyone. Whether you’re planning on whitewater rafting or a more sedate walk back through time among ancient pyramids, adventure travel in Mexico is sure to please whatever incarnation of Indiana Jones there might be in your heart and soul.

A River Runs Through It 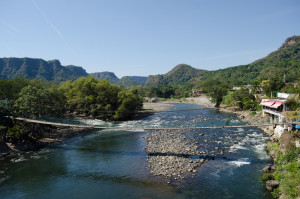 Sunny day on the river in Jalcomulco, Veracruz.

Alternative tourism is alive and well in Mexico, and what better way to exercise a bit, see the sights and leave no trail than to take a rafting trip down the crystal-clear, very cold rivers of Veracruz. You can take a float down the Filobobos River, just two hours from Xalapa, and negotiate Class II-V rapids, but don’t forget your (waterproof) camera: the river runs past the El Cuajilote and Vega de la Peña ruins and you’re going to want to take that memory home with you.

For experienced rafters, the highlight of any trip is the famous Río Pescados section of the Antigua River, a fast 10 mile run of continuous Class IV whitewater. The rest of the river features 14 miles of Class III and IV rapids in cold water, but there is a fantastic reward at the end: the hot springs of Carrizal. Exhausted rafters can soak in the enormous pool, shower, change out of their wet clothes and enjoy a delicious meal of fresh river langostinos in the open-air restaurant.

If you prefer tamer waters but still don’t want to miss out on all the fun, try the Río Actopan, just north of Xalapa. The scenery is unmatched and the rapids along the 10-mile run are a mere Class II and III.

The best time to enjoy a rafting trip is May through August and you’ll find there are several adventure tourism outfits based in Xalapa and Veracruz City to help organize the best trip for you. Some of them will provide camping and meals, while others run their own small hotels on the banks of the river—a couple even have massage rooms and gourmet dining. Whether you really rough it or slightly rough it, either way it’s still a great escape! 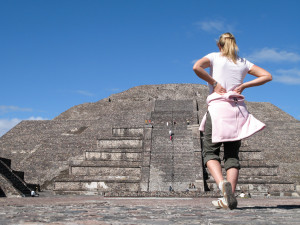 Pyramid of the Moon in Teotihuacán.

A stay in Mexico City isn’t complete without a visit to the ancient city of Teotihuacán, located less than an hour from the historic centro. Known as “the place where men become gods,” this sacred site was an important religious and economic center for the Aztecs. By 600 AD, it was the sixth largest city in the world, boasting 50,000 inhabitants.

Today, the scope of this impressive architectural complex can still be divined from its spectacular ruins. The Pirámide del Sol (Pyramid of the Sun) is the third largest pyramid in the world, constructed of about one million cubic yards of material. The smaller Pirámide de la Luna (Pyramid of the Moon) stands at the end of the Calle de los Muertos (Street of the Dead), a majestic thoroughfare 130-feet wide and 1.5-miles long, flanked by temples, palaces and platforms. There are also smaller temples dotting the area, as well as over 4,000 one-story apartment buildings. Don’t miss the well-preserved murals in the Palace of the Jaguars and the sculptures in the Temple of Quetzalcoátl.

Make sure your smartphones and cameras are fully charged (you might even want to take a power pack), because everywhere you look you’ll find something awesome for your lens to capture. Tip: please the dancing pumps at home and wear sturdy walking shoes—there’s a lot of ground to cover, and you’ll want to try your hand at climbing the pyramids themselves. Try to arrive in the morning or the end of the day for a cooler and less crowded excursion. There are plenty of facilities on-site, including toilets, a restaurant and a museum. 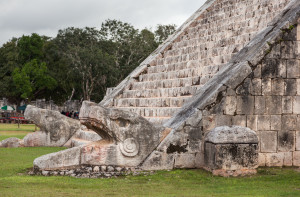 Just 75 miles east of the city of Mérida stands the most important archeological site of the Mayan culture. Covering an area of some six square miles, the sacred city of Chichen Itzá, one of the Seven Wonders of the World, awaits visitors with an awesome collection of beautifully restored pyramids and buildings. Among these, the best known is the Pirámide de Kukulcán (also known as El Castillo) a square-based, stepped pyramid approximately 75 feet tall. Built for astronomical purposes, it puts on a show unlike any other in the world: during the vernal equinox and the autumnal equinox, at about 3:00 PM, the sunlight hits the western balustrade of the main stairway, forming a 37-yard long line of triangles that morph into a serpent’s body. As the shadows creep down the side of the pyramid, the body joins the huge serpent’s head carved in stone at the bottom of the stairway. The pyramid is also a calendar: its four stairways each contain 91 stairs plus a superior platform, all adding up to 365—the number of days in a year.

The buildings and sites are divided into two groups. Among the most important ones is the Ball Court (the largest in Mesoamerica) and the Temple of the Jaguars; the Caracol (the Observatory); the Temple of the Warriors, with its pillars sculpted in bas-relief; and the Temple of the Bearded Man. An eerie on-site must-see is the Sacred Well, a beautiful, deep cenote (freshwater sink hole) that was used for rituals involving human sacrifice. This is where young women, children and elderly men and women—as well as valuable jade, gold and copper—were “offered” to the Rain God in exchange for favorable weather for the crops.

The entire area can be seen in one day, but there are nearby hotels should you wish to stay the night. Tip: we highly recommend taking in the Sound and Light Show that takes place in the ruins themselves.