What to Do and Where to Go: Pie Festival, Pie Town, NM

Posted on September 2, 2015 by Lydia Gregory 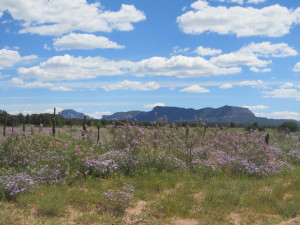 View of the Sawtooth Mountains from Pie Town, New Mexico.

Ever had a spicy slice of New Mexico’s Green Chile Apple Pie? Then you don’t know what you’ve been missing—and there’s no better time to get one than at the 35th annual Pie Town Pie Festival in western New Mexico. Every year on the second Saturday in September, this tiny hamlet in the high mountain desert welcomes pie lovers from all over the country to this tasty event. 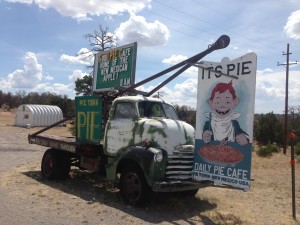 Never heard of Pie Town, you say? Located just off US Highway 60 at mile marker 56, it’s a quirky little stop along the Continental Divide Trail (famous in its own right, of course). Pie Town got its name during the early 1920s when an enterprising local, Clyde Norman, established a dried-apple pie business that became well-known along what was, back then, a busy cattle trail and the first coast-to-coast highway. The cowboys loved his pies, spread the word, and Pie Town was born. 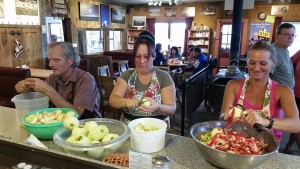 Peeling party at the Pie-O-Neer.

Nowadays, there are several shops continuing the tradition of Mr. Norman (see below in “Where to Eat”) and Pie Festival is the very best place to get a taste of some pretty amazing recipes. In fact, the main event is the Pie Baking Contest, which gets entries not only from locals but also from people traveling great distances to enter their own personal best, so you never know what your taste buds could bump into! 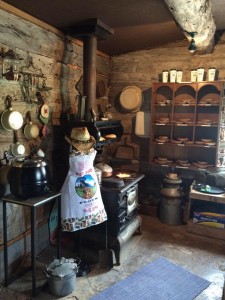 A peek inside The Pie Source Homestead Pie and Coffee Bar. 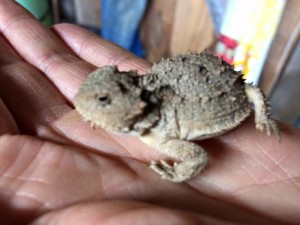 This is precisely the kind of festival that appeals to RV travelers, and if you’re considering pointing your rig in the direction of pie you should know there’s free RV parking year round in Jackson Park—including for Pie Festival! It has a water fill only, but there are state trash barrels just to the east on the south side of the road and west, also on the south side of the road at mile marker 52. 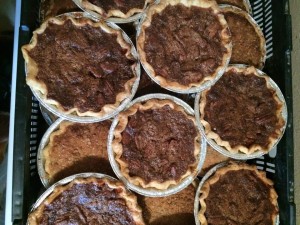 Passel of personal pies at The Pie Source.

Ready? Of course you are! Because there’s always room for pie…

*All times are on Mountain Daylight Time. We highly recommend checking the websites for business hours as they vary seasonally.* 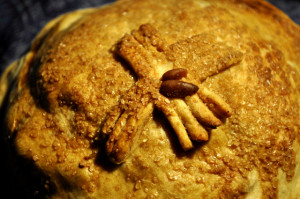 Owned by Camilla and Bill Van Penn, the Pie Town Café’s New Mexican Apple has been featured in the Smithsonian Magazine (February 2005), the Food Network’s “The Best Thing I Ever Ate” with Duff Goldman, as a featured recipe in Food Network Magazine and, more recently, in a segment of CBS Sunday Morning with Bill Geist.

Besides killer pies, they’re the only place in town serving homemade breakfast, custom burgers, slow-baked pulled pork, and hand-cut French fries. They’re open Sunday through Wednesday 9:30 a.m. to 3 p.m., with a slight variation of those hours for Pie Fest (see their website for details and the recipe for their New Mexico Apple Pie). 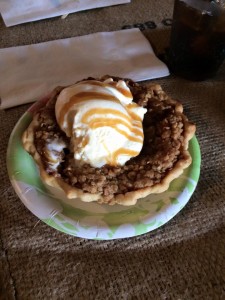 Housed in the DanCyn Windmill Museum, a “period authentic” homestead cabin filled with memories of local families, homesteaders and ranchers from the 1920s, Pie Source owner Cyndi Fowler welcomes travelers with piping hot coffee and freshly-baked whole pies—no slices! Their famous 6” mini pies are good enough for two, if, that is, you want to share, and were also featured in the Food Network Magazine, The Food Network Channel and the Smithsonian Magazine.

They’ll be kicking off the Festival on Friday, September 11, with All-American Hot Dogs and Apple Pie and live entertainment from 4-6 p.m. On Saturday their Coffee House and Mobile Trailer will be open from 7 a.m. serving pies, ice cream sundaes, root beer floats, and other sweet treats. There will be a live radio broadcast at the shop with host Barry Lee from 10 – 1 p.m. and singer-songwriter duo Austin Ladd & Patti singing from 2 – 5 p.m. Check out their website for the recipe to their famous Pecan Pie. 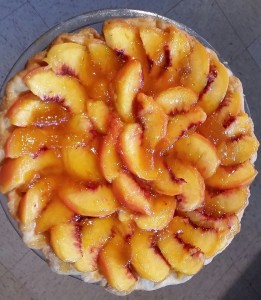 Peachy deliciousness at the Pie-O-Neer.

When owner Kathy Knapp and her family drove into Pie Town in 1995 in search of real pie, what they found instead was a sign that read: “There used to be pie in Pie Town, but there ain’t no more — FOR SALE.” Cue forward a few more months, and Kathy, her mom and her daughter found themselves elbow-deep in flour, reviving Pie Town’s legacy of delicious, home-baked pies. Housed in an old frontier-style building with a rambling porch on US “Pieway” 60, the Pie-O-Neer offers a mouth-watering selection of pies, several of which are available as “take & bake” pies.

They have been featured in Sunset Magazine, Travel + Leisure, Fodor’s and Moon Travel guides; they’re on the Food Network’s “Best of New Mexico” and have been in a short film called “A Piece of Pie” which won the International Family Film award in 2006’s Film Festival; and CBS Sunday Morning with Bill Geist. Kathy has also been the focus of an award-winning short film named, appropriately, Pie Lady of Pie Town.

The day of the Festival they’ll have a plethora of pies and will be serving New Mexico Green Chile Stew all day, plus regaling patrons with music on their porch and an organic fruit/honey/veggie stand on one side and another with Coon Ridge organic goat cheese on the other. Open Thursday through Saturday from 11:30 a.m. until the pies are gone.

Pie Town’s latest addition to the foodie lineup, The Gettin’ Place is a  souvenir/burger bar located just west of the Post Office and will be serving food and pie during the Festival.

The Travel Channel was in town in late August filming in the shops… stay tuned for an update on show times!!